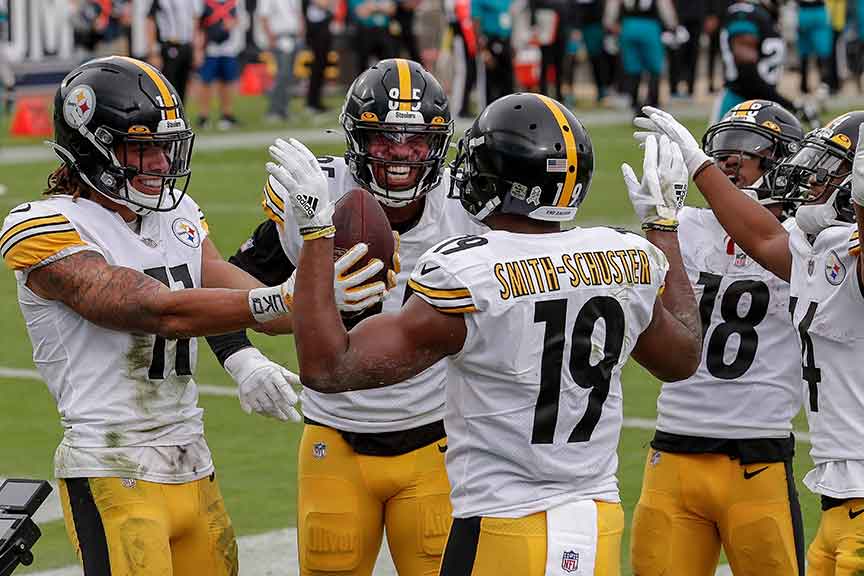 The Steelers can boast that they can field perhaps the best WR core in the league, although the future for the group may be somewhat in doubt. The trio of Chase Claypool, Diontae Johnson, and JuJu Smith-Schuster will have to divide Pittsburgh’s targets this season, and it remains to be seen exactly how that may impact each’s player's fantasy outlook for the 2020 season.

As much as I love all three of these players in terms of their fantasy production, Pittsburg stands to run the ball more in 2021, potentially reducing the size of the total target pie from the start. And it’s not like there’s only the three options in the passing game, with tight end Eric Ebron garnering 91 targets last season. This plus incoming rookie running back Najee Harris likely to receive a fair number of targets. Not to mention that as of this writing, talented wideout James Washington, though having requested a trade, remains a member of the Pittsburgh Steelers.

The question, is how much are we likely to see the passing game retract in the upcoming season? And to what degree can we expect targets to decrease in 2021? Will there be enough to go around?

Combine these concerns with what seems like the inevitable breakout year for Chase Claypool, who is likely grabbing a much larger slice of that target pie 2021. Which, incidentally, Claypool will absolutely need to do to replicate his 13.3 PPR PPG finish from last season, where his 10 touchdowns buoyed his fantasy finish significantly. His fantasy points due to TDs, which aren't as sticky a statistic year-to-year as targets for example, accounted for 25% of his gross fantasy point production in 2020, an efficiency rate that could be very difficult to replicate in 2021. This applies equally to JuJu Smith-Schuster whose fantasy output also relied heavily on TD scoring, with touchdown scoring accounting for 23% of his total fantasy production. You can contrast this with teammate Diontae Johnson, who, in the same offense, managed to score more than his compadres on a per-game basis despite scoring two fewer TDs on the season. A performance that will not only be easier to replicate, it could potentially even be surpassed in the coming season.

Who’s in the Slot?

Will Claypool genuinely be playing more from in the slot, as has often been inferred from Smith-Shuster’s comments about his potential usage in the upcoming season. With what is seemingly JuJu Smith-Schuster’s last chance to prove that he’s worth big-dollar contract, he stands to eat into the production of the other two receivers...obviously that's when he isn’t putting up spike weeks of his own, gobbling up the lion’s share of the target pie several weeks a year. With little clarity thus far, it is difficult to pinpoint exactly how each of these receivers will be lining up this season. If Smith-Schuster is to be taken at his word, the logical conclusion is that the team plans to slide Claypool into the slot, creating matchup nightmares given his dominant size (6’4” 238lbs). There is also some likelihood, at least by my estimation, that the Steelers keep Smith-Schuster in the slot where he spent 84.7% of his time in 2020.

Those who have made investments in Smith-Schuster’s dynasty services had better hope that he sees more time on the outside, as his aDOT of 5.5 yards last season was not only a career low, it was a major departure from his previous trend. Without more downfield targets, Smith-Schuster’s fantasy production could have a lower ceiling than some had hoped when he broke out with 1426 receiving yards in 2018. 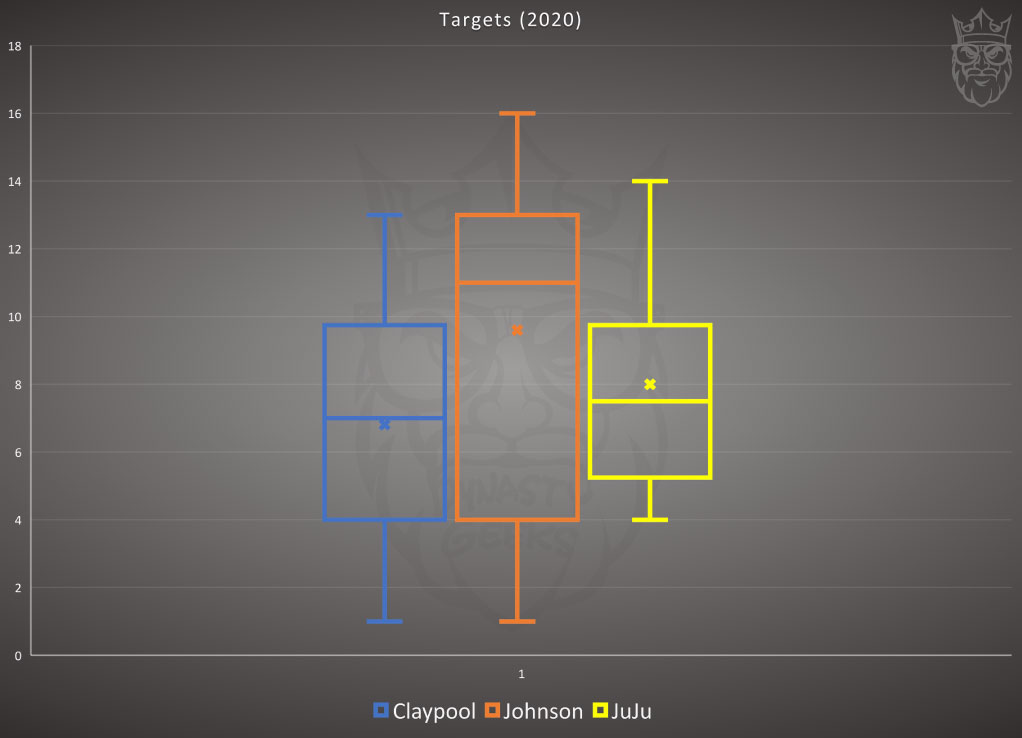 In the box and whisker chart above, the maximum weekly finish for each player is represented by the top whisker, their lowest weekly finish (in games played) is represented by the lower whisker. The distance between these two values is the distribution or the range of outcomes. Each horizontal line on the player’s chart represents the dividing line between different quartiles or 25% chunks of the data. Thus, the distance between the top of the whisker and line the horizontal line in the middle of the box represents the top half of the data; with the bottom half going from that mid-line, or the median of the data set, down to the bottom whisker. The mean or average of the data set is represented by the X, and is a literal representation of player's points-per-game on the season.

A cursory investigation into the chart above shows that Chase Claypool’s mean, or points-per-game denoted by the X, is lower than the other two receivers. Given that he was a rookie last year, I don’t think a lot can be inferred from that number. However, Diontae Johnson has a significantly higher points per game finish, and his median, again representing the dividing line between upper and lower halves of his finishes, was much much higher than the other two receivers. In fact, the top half of his weekly finishes were better than 75% of either of the other receiver’s finishes, making him far and away the receiver with the highest ceiling of the bunch. At least, if last season's production is predictive of the receiver's usage in the upcoming season.

Smith-Schuster had the highest floor in the group in 2020, with literally 100% of his finishes having a larger magnitude than a quarter of his teammate’s weekly finishes.

This isn’t to say that you should be fading Claypool, as he had by far the highest average depth of target on the team an aDOT of 13.2 yards. This bodes very well for the second-year receiver’s future fantasy production; especially given the number of targets he can expect in the Pittsburg passing game year-to-year.

There are legitimate concern about the Steeler’s offense, as the overall yards per game for their passing attack suffered in 2020 right along with their rushing attack, with the offense finishing with both the yards per reception and total rushing yards for the season metric that was lower than any of the other four years in this study going back to 2016. It’s really not hard to see why either, with yards-per-target metric also hitting a low for the study period.

Ben Roethlisberger, coming off elbow surgery in 2019, even failed to out-produce the combination of Duck Hodges and Mason Rudolph’s combined 2019 performance in terms of depth of his throws. On the season, Roethlisberger had the 5th-worst average completed air yards, besting only Jimmy Garappalo, Alex Smith, and Dwayne Haskins. Big Ben was also the 10th-worst in intended air yards according to NextGen, all of which begs the question: Is Big Ben washed?

Perhaps Ben Roethlisberger, two years removed from elbow surgery, will have renewed zip on his ball. But at 39 years old, I’ve got to admit, I have my doubts. Still, there is at least some wiggle room where optimism could potentially take root. Roethlisberger had the absolute shortest time to throw the football of any 2020 quarterback in NFL’s NextGen stat database.  Even without much optimism for dramatically improved performance from the Pittsburgh offensive line, the team will presumably find a way to scheme Ben a couple-few additional tenths of a second more time to throw, thus allowing receivers that extra moment to gain separation. After all, regression works both ways.

This concept would seemingly benefit both JuJu and Johnson greatly, not to mention budding premier-deep threat Chase “Mapletron” Claypool, all of whom stand to benefit with more time for routes to develop.

An extra half-second, putting the quarterback into the average range for an NFL starter, would likely improve WR aDOT metrics significantly, as well as providing a massive boost to passing yards per target and passing yards per reception; or the exact metrics that were actually quite poor for the Steeler’s offense in 2020.

Additionally, Pittsburgh threw the ball the 3rd-most in the league in 2020 with 608 attempted passes, a rough benchmark that although elevated, isn’t exactly an outlier on a historically pass-happy Pittsburgh team. This should provide fantasy managers a reasonable amount of hope that even if the team rushes the ball more in 2020, that there should still be ample targets to distribute in the offense.

Despite the lack of rushing production in 2020, the number of rushing attempts per game stayed roughly flat in 2020 as compared to previous years, at about 22 rushes per game or about 400 per season. What has declined is the team’s rushing efficiency. In fact, year over year the Steelers have observed a decline in their rushing attack to the point where in 2020 we saw a 23% decline in total rushing production as compared to their 2016 numbers.

The decline of the effectiveness of their running game over the course of the 2020 season was marked, and it’s evident that the coaching staff made adjustments. You can see in the following chart how the Steelers gained yards on offense over the course of the 2020. As the season progressed, a larger and larger percentage of the offensive yardage production was due to passing production.

With rookie phenom Najee Harris in the fold, it’s reasonable to suggest their rushing efficiency should bump up, perhaps markedly. However, I’m still projecting them for about 22-23 rushes per game, or the rate they’ve consistently demonstrated for four of the past five years.

Thus, merely a small degree of regression is the most likely prediction in terms of pass attempts. A passing volume that should provide ample targets for Pittsburgh’s talented receiving core, from the big-three trio at WR to the perpetually underrated TE Eric Ebron. The odd man out in this rotation seems to be James Washington, who seems far too talented to be a WR4 on any team. Perhaps now is the time to buy-in on Washington's  dynasty services before he's shipped to a team that needs a legitimate deep option...I'm looking at you Seattle.

The real conundrum here is Pittsburgh's pass target depth. Can Big Ben deliver the ball downfield consistently in what is likely his last NFL season? At this point, nobody knows for sure. One thing we do know, is that the Steeler’s passing offense, and the fantasy production of his trio of talented WRs,  likely depends on it. But, if Ben’s arm is as toast as it appeared this previous season, I’m not sure how confident I can be about Chase Claypool’s incoming season in specific. Unless perhaps the Steelers find a way to utilize the promising second-year receiver in shorter yardage situations, I see him as the most likely candidate to suffer from what seems like the inevitable retraction of the Steeler’s passing attack given that thus far he has been  most dangerous in a deep threat role.

Thus, despite my bullishness about Johnson and Claypool from the dynasty and best ball perspectives, and Smith-Schuster in a redraft frame of mind, I’m remaining conscious of the risky nature of all of their potential 2021 fantasy production. All three could absolutely launch themselves into the WR1 conversation, or alternatively, they could also all be muddled in a timeshare with the two other talented pass-catchers.

I’m certainly aware that every one of the big-three Pittsburg Steeler receivers will likely have a few monster weeks. The question is whether or not you’ll be able to predict which one it will be on any particular week. A question that, at this point, remains to be determined.