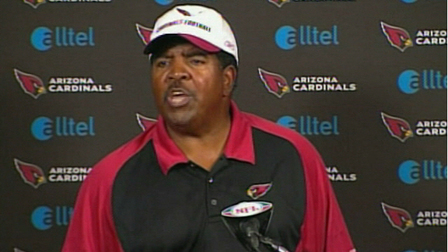 Arizona Cardinals Head Coach Dennis Green in his epic rant following a loss to the (24-23) Chicago Bears Oct 16, 2006. This despite his team once commanding a 20-point lead and not allowing a TD on defense.

You enjoying the pre-season. Yeah, me neither. But it's really necessary for NFL general managers and coaches to see how these players look in game-action.

So, wait a minute. Doesn't that imply that we, as fantasy managers, should also be watching these games for the purposes of scouting some of these younger players? Absolutely. But just keep a slow roll, after all, this is  only preseason.

Yes, in this final week of the season we're finally seeing a bit more out of the starters. Teams are starting to show us what their offense will really look like. But the real headlines are the big dynamic plays, the ones that look great playing in the background while the pretty talking head over at ESPN is saying terribly little, yet asserting it forcefully and succinctly, in a manner that makes one believe they just have heard something other than blather. It's really quite amazing stuff.

But does it really matter then that New England Patriots rookie running back Rhamondre Stevenson popped off a 91-yard TD run in his season debut?

This touchdown was scored in the 4th quarter, long after the starters from the Washington football organization's assemblage of professional football players aggregated for the purposes of the pursuit of one Lombardi trophy had ceded the field to the players who are fighting for a roster spot on said franchise (wouldn't it just be easier to give the team a name Mr. Snyder?).

Perhaps what is most pertinent is that Stevenson, labeled a plodder out of college due to his perceived lack of game-breaking speed, might actually be pretty fast.

Check out this analysis of Stevenson's size-adjusted speed scores, or analytical metrics that account for how much mass/meat is moving at speed.

This seems to indicate that Stevenson is neither as much of a plodder as we imagined pre-draft, nor is he as irrelevant as many (including myself) believed during their rookie drafts. Trading away Sony Michel to the Rams seems to indicate that the Patriots feel comfortable with their depth at RB. But let's recall that he's playing alongside promising young back in Damien Harris, also JJ Taylor who has flashed soft hands and has some elusiveness. Also veteran James White is still on the team and will get playing time. So as much as I like the potential I'm seeing in Rhamondre Stevenson, I'm not buying in just yet. He's a solid hold though, if you took the leap of faith early on, and these early returns have significant promise.

But what about all those other performances? Well, a grain of salt is all I can offer. Is it pertinent that Corey Davis appears to be the number one option in the Jets' passing offense? Yeah I think so, Wilson appears legit and the volume could very much be there. Should we care about long return TDs like Marquez Stevenson's 79-yard punt return TD? Probably not.

I'm more influenced by playing time or target share, which is why I'm watching the Pittsburgh offense's preseason closely. Najee Harris has an impressive 4 targets over 3 preseason games; but he has received far more playing time than most of his teammates, so again, grain of salt. Chase Claypool has been limited by injury after his impressive pre-season debut. Smith-Schuster grabbed 5 receptions off of 6 targets in their third and final pre-season game, while Diontae Johnson received constant 1st-team reps and targets throughout the preseason. I still think it's too early to predict Claypool as the potential breakout star of that offense, as target share will always cap his 2021 upside. Yet the media hype surrounding Claypool's obvious athletic ability prevents any ability to buy-low and reap the dynasty rewards. Keep an eye out for a slow start from any of the three and pounce if you have an opportunity to buy at less than market value.

But what about Trent Sherfield's notable connection with rookie QB Trey Lance?

I'll remind you that Lance isn't the starter yet. Garoppolo, for all his conspicuous weaknesses, has still won a lot of games with the 49ers having gone 16-6 in games he's started for the club. Of course that doesn't mean Jimmy is going to play all season. Even if Jimmy were outplaying Lance on the field, which isn't apparent at this point, Garoppolo has missed 43% of his games since becoming a 49er, with most of that time being spend on IR.

In short, it's unreasonable to think that Garoppolo is starting by the end of this season. But does that mean wheels up on Trent Sherfield? Absolutely. That's if Kittle, Aiyuk, and Deebo Samuel all go down to injury. Then yes. Wheels up on Sherfield. Until then, he remains a speculative add, at best.