This whole thing started innocently enough, that I assure you. I was just trying to put together a point-projection model that might assist me in creating some projections I could contribute to my dudes over at @thecuttffb. After a week diving through Excel spreadsheet columns and rows, and having performed perhaps one too many vlookup’s, I do believe I’ve stumbled on to something worth sharing. Not the task at hand mind you, those point projections have been sitting idle in my to-do list since early July. Instead, in true geek fashion, I found myself lost in a tangent of mathematical correlation. Exciting, I know!

The point isn’t that that I managed to sum a large column of numbers, rather that the correlations I found pointed to an underlying truth in fantasy football, and perhaps even a simplified way to consider point projection.

To begin my study, I wanted to consider two factors when comparing the value of fantasy metrics:

For this study I downloaded the seasonal receiving stats from Pro-Football-Reference  for each of the last 10 years (2010-2020). I then looked for stats that correlated to fantasy points scored at the receiver position (receiving stats only), or in other words, the fantasy points accrued from (receptions, yards, and touchdowns scored). In order to correct for games played, I compared all stats on a per-game basis so all my comparisons were apples-to-apples.

In this case, the first step to measuring the correlation is to do a linear regression, which is so much simpler than it sounds.

Adding a trendline to your scatter plot produced by charting the various efficiency metrics versus standard score per game for the entire 10-year sample set will produce an equation that defines that correlation. I've yet to embark on the advanced data crunching software programs, but something as simple as Excel can perform this task for you with just a few clicks. From that trendline, the software will also provide you with and R2 value, which defines the degree of correlation between the two sample sets.

The R2 is a measurement of how closely your trendline “fits” the data, and ranges from zero to one, where an R2 of 1 or 100% indicates a perfect correlation between your linear trendline and the data itself. For this exercise, the relative value of the R2 value as compared to that of other metrics is what is truly pertinent. Just remember that bigger is better and the closer you get to 1.0 the closer you are to having your model (in this case the equation of the trendline) account for distribution of the data in your sample. In essence, bigger is better and 1.0 is perfect. 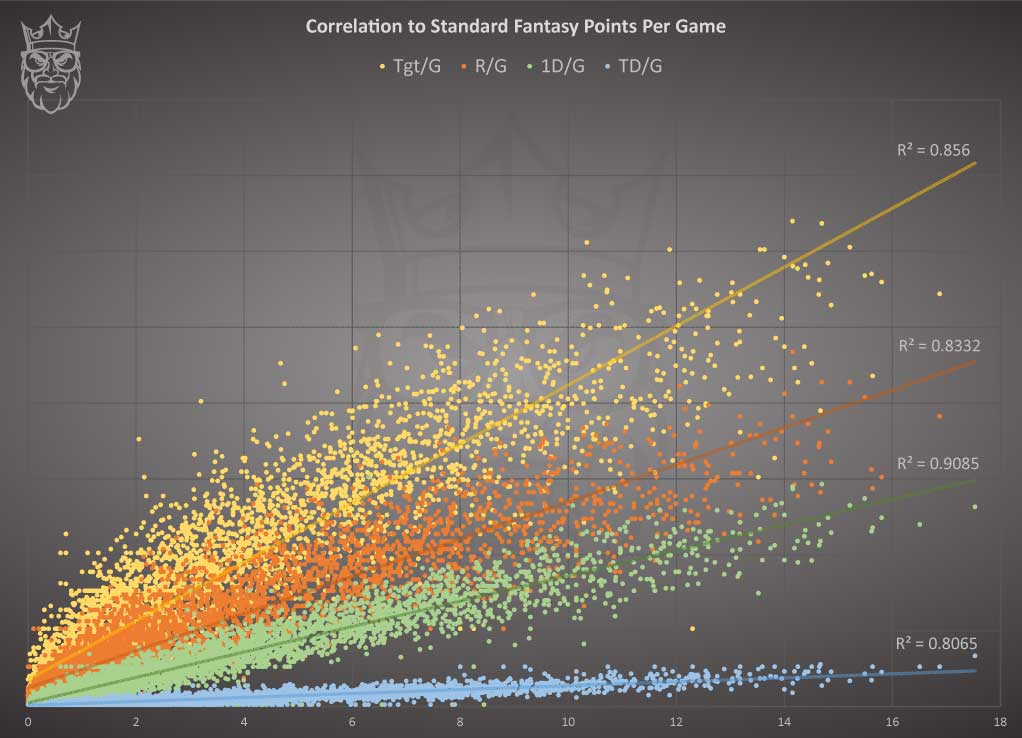 Here are few metrics that closely correlate to standard fantasy scoring. The R2 value for each correlation provides a numeric value you one can use to compare the degree of correlation for each metric.

The image above is simply a graphic to give you a concept of not only the process involved, but also how certain types of data present themselves on the chart. You can see that targets per game (Tgt/G) have a much larger spread than does touchdowns per game (TD/G). Where even though their R2 values are similar, one is very clearly "off" by a greater magnitude. The similar R2 values are telling you that the magnitude of those differences positive and negative are similar and are essentially offsetting each other.

You'll note that of the metrics above, first down receptions per game (1D/G) is the most correlated to fantasy scoring.

I did add in a few advanced metrics, though I wasn't able to correlate that across the large sample set from above. Regardless, what I found may surprise you. While average depth of target (aDOT) is one of those new trendy stats, often touted as great predictor of fantasy production, it actually wasn’t amongst the most highly correlated to fantasy point production (R2 = 0.14). Nor, for that matter, did another trendy stat, Targets Per Route Run (R2 = 0.387). One metric that did stand out was Yards Before Catch (R2 = 0.85) which is similar to aDOT but only considers receptions rather than total targets. So it makes sense that it would be more correlated to scoring than aDOT alone.

The next step is to determine of the most predictive stats, which statistics we can expect to remain at least relatively stable year to year. Check out my next piece in this series where I explore sticky stats.