In the previous Predictive Metrics - Testing the Algorithm we established that the algorithm that took us a few minutes to derive actually has a fair degree of predictive merit. Not quite as good as the Fantasy Pros consensus projections, but it comes at a tiny fraction of the time-invested. Thus, these findings are not without a fair degree of importance.

The question, is whether or not we can improve on the predictive accuracy of the projections the model produces without also including contextual information?

Objectively, age is probably the easiest data point to look for year-over-year trends that we can then import into our receiver score projection model. So that is where I'll start.

To investigate, I went back to my database of receiving stats that I had collated by players with nine-year contiguous careers, which in my database gave me the largest possible sample “career” sample size I could without excluding too many players (nine-year careers are quite rare, ten-year careers far rarer.) For each player I was only interested in a single metric, their first down reception per game efficiency rate on the season. I could then compare this rate year over year, and inspect the data for trends as it related to the player’s age.

To analyze the data I calculated the difference between each player's seasonal finish in terms of first down receptions per game from one year to the next. Not only did provide good insight into how players progress and decline throughout their careers, but this will provide a number that is more relatable player to player, regardless of their individual volume as well. Sorting this data by player age and averaging this values across the player pool sample allowed me to get a clear picture of what changes in player production look like over the course of a players career.

As one might well predict, player production increases steadily after their rookie season before cresting and dropping off at age 28 or 29. It can reasonably be asserted that most players, outliers excluded, will have hit their production peak by their 29th birthday, and negative regression is the most likely scenario from then on out.

Using a similar method by which we derived the model that projects fantasy scoring based on first down receptions, we can derive a formula from this data that will allow us to project changes in first down receptions per game based strictly on a players age. The model in this case produces a parabolic distribution just like the data itself as seen in the chart below. 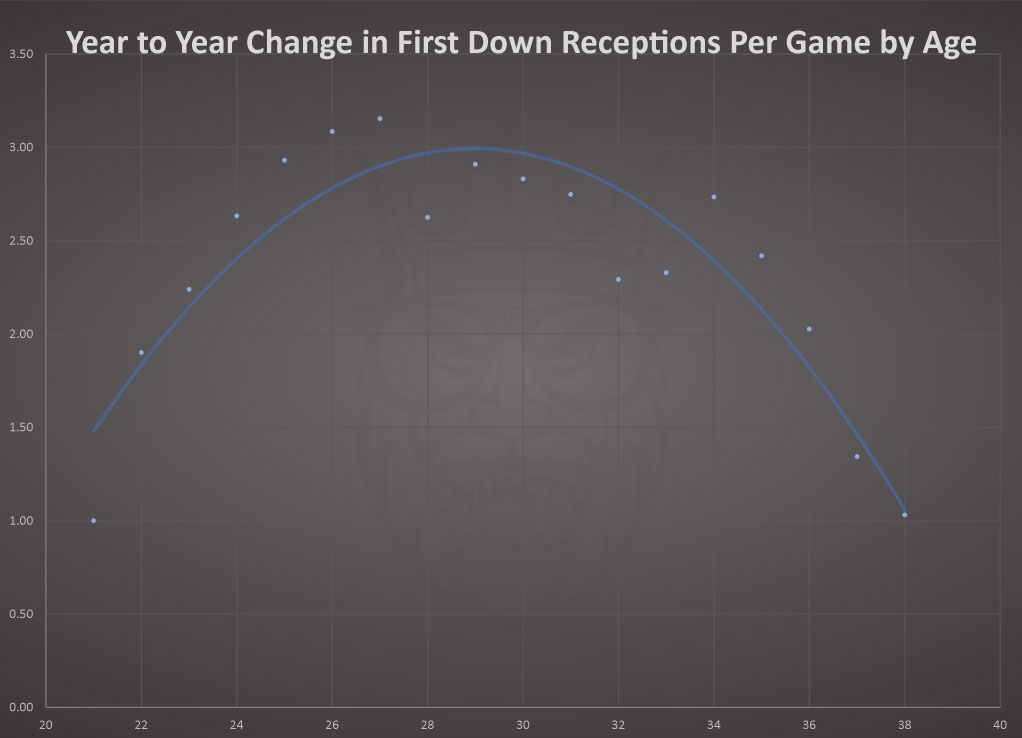 In perhaps the most predictable chart of all time, year to year shift in stats that are highly correlated to fantasy production shift positively as a player enters his prime and negatively after leaving the prime age range (~24-29 years of age).

The utility of this  particular model isn’t to predict fantasy scoring of course, but to predict first down receptions per game year-over-year on the basis of merely a player's age. The predictive strength of which we can test in the same manner as we did with our points projection model.

Thus we can now input a player's first down per game efficiency from the previous season as well as his age, and the model will produce a value that we can then add to the player's previous season finish at the metric. For older players, the model produces a negative value, thus adding that value that the model produces will decrease the estimate for first down receptions for the older players and will increase the estimate for younger players.

We can test this model by plotting its results for 2019 player data against the 2020 results. You can see that information charted below. 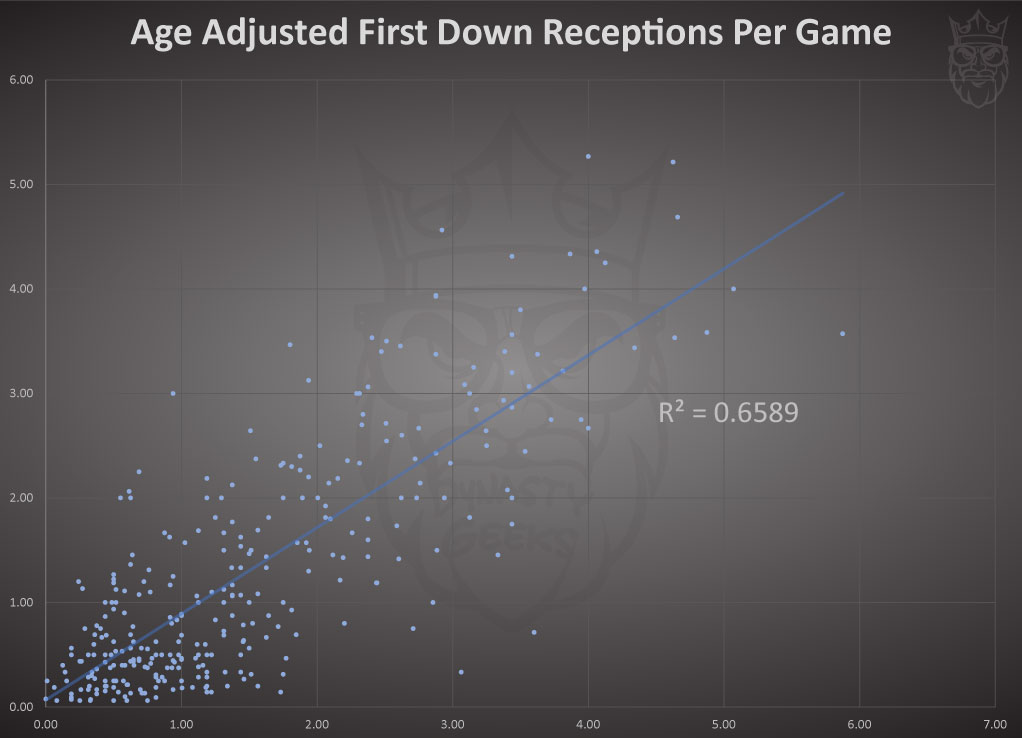 You can see in the chart above a reasonable degree of fit between the model we derived to project the year-over-year change in first down receptions per game. While the correlation isn't perfect, it seems like a reasonable projection.

The next step is to see if that age-adjusted first down per game metric will help us produce a more accurate projection algorithm.

Check out the next piece in the series were I put this question to the test.