In the previous posts in the Predictive Metrics series I established that some efficiency metrics bear a large degree of statistical correlation to fantasy scoring. Or in other words, ten years worth of receiving data indicated that players who ranked highly based on certain metrics also seemed to score a large amount of fantasy points.

Additionally, I showed that some stats are volatile year over year, some to a degree that they are impossible to employ as a predictive metric regardless of their strength of their correlation to fantasy scoring.

Using those two criteria to sort our data, we established that first down receptions per game is going to be the most likely place for us to employ an efficiency metric towards fantasy point projection.

The next step in this process is to actually derive a formula based on the first down reception per game metric that we can use to project fantasy scoring.

First of all, let’s be clear about something.  I mean, it’s not like I’m not Bill Gates over here. I.e., I’m not a programmer...I mean aside from that time back in high school when I programmed my calculator to play Choose Your Own Adventure game rather than doing my calculus homework, that is.

What I’m saying is that I’m not trying to build a complex model that takes into account barometric pressure or the last time a receiver got lucky, I’m simply trying to demonstrate the predictive power of specific statistics in fantasy football. In other words, I’m gonna go ahead and keep it simple. Thus there will likely be no new form of wheel invented by the end of this process (which I take as a positive because my goal is to predict fantasy sports, not re-invent wheels.)

Recall that we assigned a trendline to our chart of standard fantasy points per game versus each of the metrics outline in the previous article (Intro to Predictive Metrics). That trendline is a function, or an actual mathematical formula, that projects the value we're looking to correlate (in this case fantasy scoring) with whatever metric you've charted opposite that value. The accuracy of that predictive model is literally expressed by that R2 value we discussed previously in this series.

We can use the formula for that trendline as the basis for our prediction algorithm. What is required is that we back-calculate for the variables of interest to create the formula. We can then run a set of data through that formula, charting the results as our point projection versus actual fantasy scoring. (Shown below). 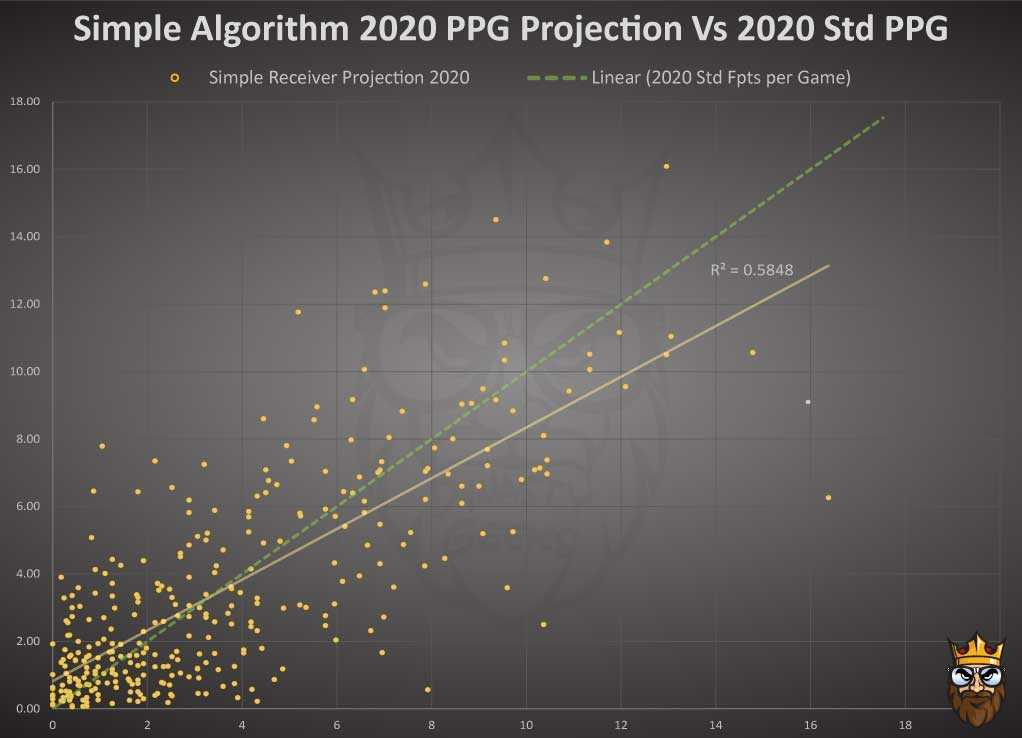 The image above represents first down reception data from 2019, modified by the simple formula we derived using the correlation between that metric and fantasy scoring.  (The dashed green line is actual scoring, and demonstrates what a perfect (R2 = 1.0) projection model would yield.

The question at this point is how much actual utility does this projection have? How does it compare to other projections? Thus far we have mere minutes invested. Does that represent time wasted, or the shortest of short cuts to fantasy projections?