But correlation to fantasy scoring isn’t all that is necessary to establish which metrics are most predictive. Critically you need to know how likely a player is to recreate a given performance for a specific metric, or how “sticky” that stat is year-to-year. In order to establish which receiving stats are most “sticky”, I compiled player data from past ten years as mentioned in the previous post. I then sorted the data to include only players who had at least a 9-year career.

I then performed an analysis to determine the standard deviation of the year over year change in end-of-year-finish at each metric. Recall that standard deviation is a measure of volatility. For example, I tested a player’s standard deviation in the number of targets per game they received one season as compared to their finish the following season. The same with receptions per game, targets, and so on.

What I found is that some metrics were absolutely sticky, both year over year as well as across a player’s career; while others were too volatile to be reliable as a predictive stat. After all, it doesn’t matter how well correlated that metric may be to fantasy scoring if a player can be expected to vary to a significant degree in that metric on a year-to-year basis.

In this sample set receiving yards per game as well seasonal reception totals and receptions for first downs, are all metrics that a that are simply too volatile to be of any particular predictive utility. That relative degree of volatility year over year is represented in the chart below as defined by the stat's year over year Standard Deviation.

If you combine this "stickiness" data with the correlations to fantasy scoring that we determined in the previous post, this then gives us two metrics upon which to compare our stats. Again in terms of their predictive value:

The following chart shows clearly how much value we should be giving to each individual stat, in terms of how predictive of fantasy scoring it may be. 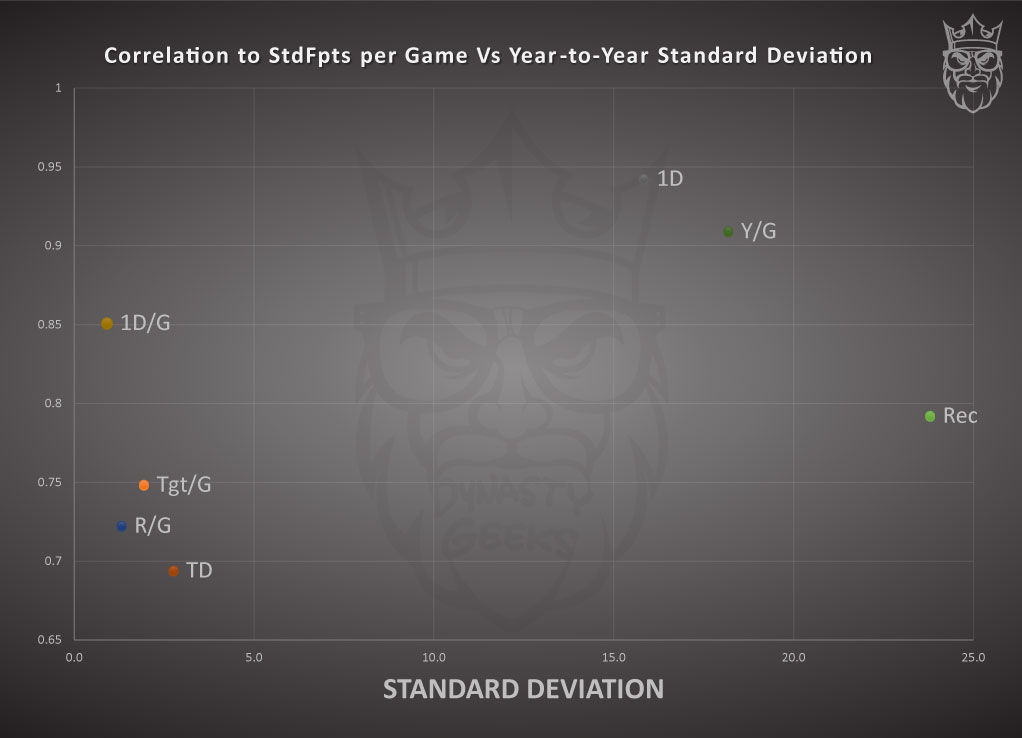 In this chart you want to see values with a high correlation to standard fantasy scoring, or data positioned higher vertically on the chart. You also want to see data that has a low year over year volatility, or data that is positioned furthest to the left on this chart. Thus data points positioned furthest to the upper left of the chart above have the lowest degree of year-over-year fluctuation and are the most highly correlated to fantasy scoring.

You can see from this chart that not only are first down receptions per game highly correlated to fantasy scoring, but of this group it has the least volatility year to year.

Next we need to see if there is a similar degree of correlation between a player's final efficiency metric for a given sseason and their fantasy points for the following season, which is where the real predictive strength occurs.

To do this I simply grabbed a 3-year sample and filtered to ensure that all the players have statistics for all three years. I excluded players who failed to score fantasy points or in this instance who failed to secure a first down reception. Then I simply charted the first down receptions per game for the 2018 season and compared it to that player’s 2019 standard points per game production. I did the same for player’s data from 2019 comparing it to their 2020 output.

As you can see from the chart where I have charted the player's 2019 season finish for first down receptions per game versus their respective 2020 fantasy point production, the correlation is not as tight as one might hope, but considering the complete lack of context within these numbers, that's a relatively impressive degree of correlation. Additionally, the  correlation holds very closely year to year and we have yet to add any form of multiplier as a means of establishing a a more accurate year-over year projection algorithm.

What this proves is one year’s first down reception data has some level of correlation to the next season's  standard fantasy point production, and that that year-to-year correlation seems to be sticky.

The next step is to develop an algorithm that we can use to help us project fantasy scoring utilizing this stat. Stay tuned.