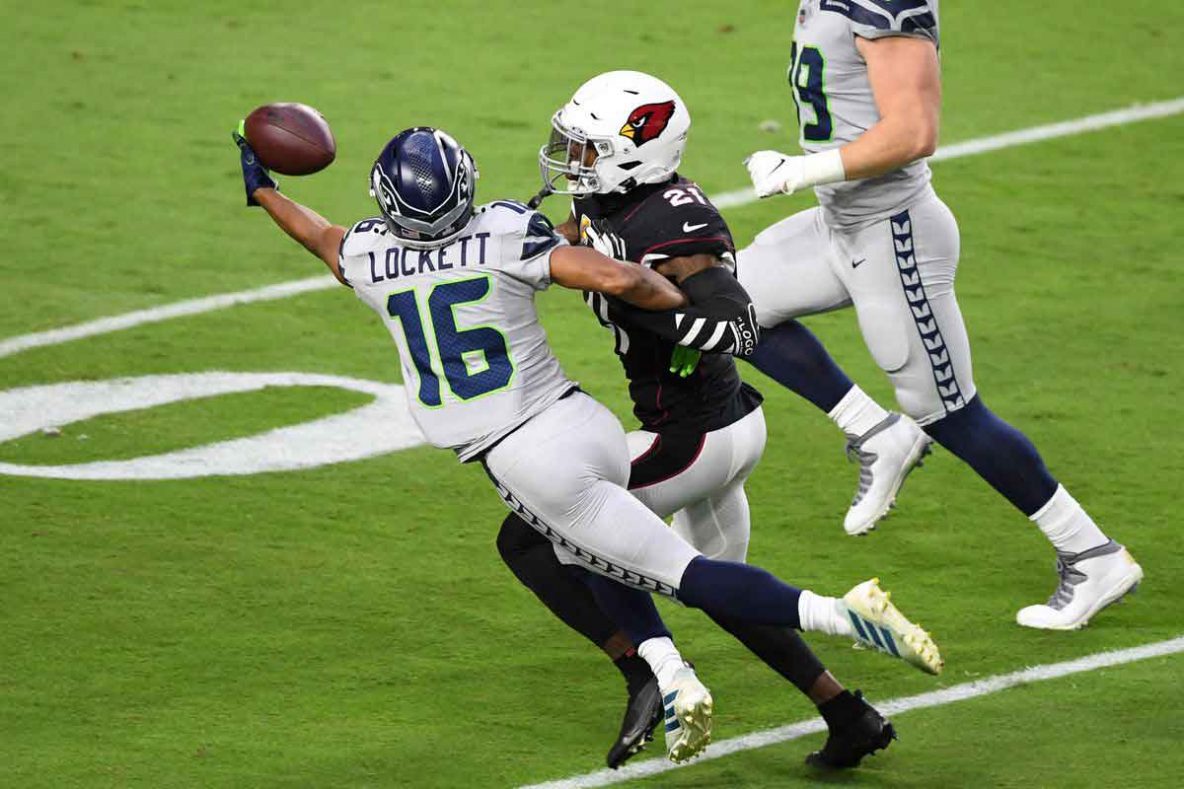 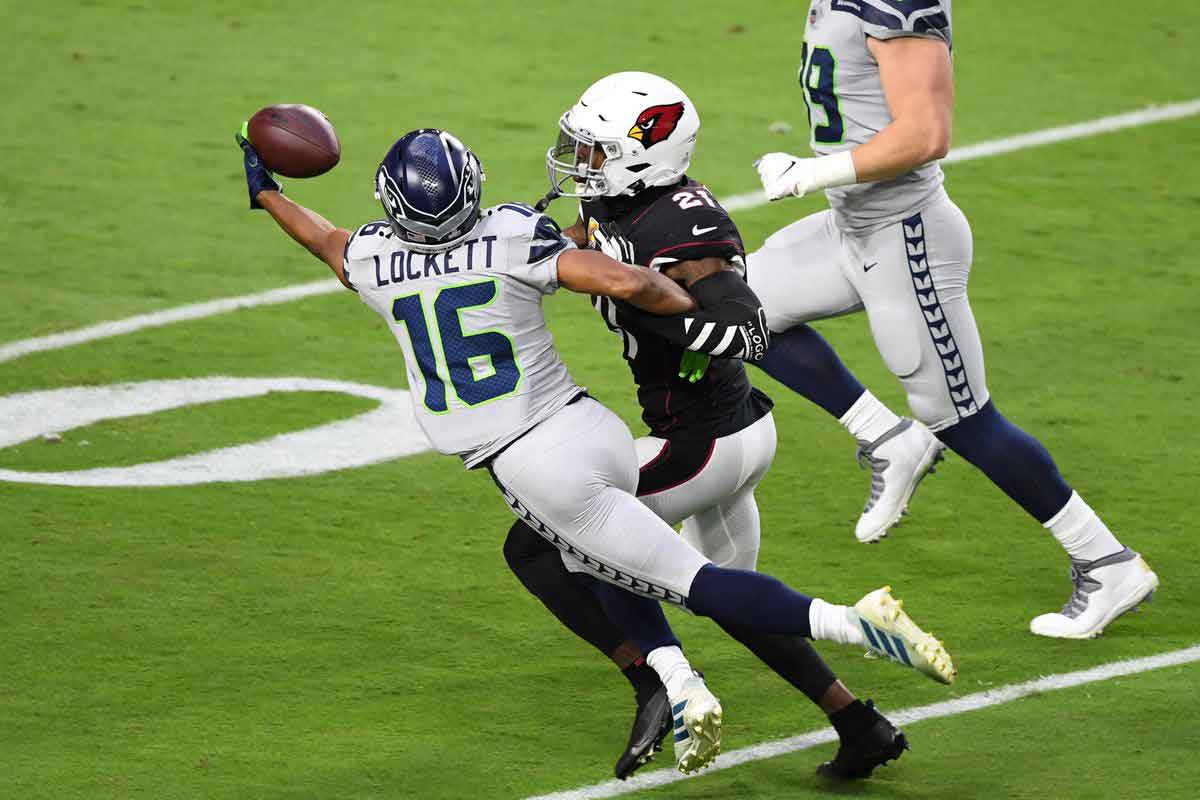 Without a doubt, one of the most polarizing players of 2021 is Tyler Lockett. Many still believe in Lockett as a top fantasy option with his overall WR1 finish in two separate instances last season, ending the year as the 8thth overall WR in terms of PPG according to FantasyPros PPR 2020 stats.   And, I mean, I kinda get it. Having a player capable of hanging 53 PPR points on your opponent is a chest-thumping kind of asset. A closer look highlights a player capable of hauling in double-digit receptions on over 8 targets per game, with his 53-point game coming on an eye-popping 20 targets.

Yet here I am, still fading Lockett.

I look at Locket’s seven finishes outside the top-48 WRs (PPR fpts) and also that he finished as a fantasy WR1 on only 6 weeks last season, who also finished as the overall fantasy WR1 on two separate weeks, I see a player with tremendous volatility, who could lose you a week as soon as win it. JJ Zachariason over at Numberfire is buying Lockett this year and is apparently rejecting the concept of Lockett’s supposed inconsistency. He points to the struggles in the Seahawks offense in general and Russell Wilson’s poor performance in specific, as the likely source of Lockett’s production volatility, rather than that being a product of Lockett himself, or perhaps more accurately, how the team uses him in their offense.

Zachariason points to the first and second half splits in 2020 where Lockett saw his production drop from 24 PPR Fpts PPG through week-7 and drop off in the second half as the Seattle passing offense struggled around him.  I’ll quibble that while Locket’s production dropped off after week-7, Seattle’s passing offense didn’t truly hit the skids until after week-9, which is where I’ll be making my comparisons.

A quick comparison of their point per game efficiency, and you’ll see two relatively comparable players in terms of fantasy production. But if you inspect the standard deviation, or the measure of variability in a data set, you can see that Lockett’s production is clearly far more volatile. Both player’s production dropped in the second half last year, and the degree of volatility dropped the second half as well. But critically, Metcalf’s numbers are significantly less volatile than Lockett’s over both periods.

His receiving yards totals weren’t the only thing to suffer during this period, as he scored half as many touchdowns per game in the second half of the season as compared to the fist half. He saw decreases in targets, receptions, receiving yards, and average depth of target, it should come as no surprise that his fantasy point production dropped precipitously as well.

But the fact remains that Lockett’s production was actually MORE volatile during those first 9-weeks (including Seattle’s week-6 bye), where the standard deviation metric, which quantifies the degree of variability in a data set, of his fantasy point production was much higher in the first half of 2020 as he scored 19.6 PPR points per game at 17.0 Standard Deviation (SD) versus the last half of the season (13.6 PPR PPG with 9.3 SD). Which, for the record, is much closer to his 2019 finish (14.7 PPR PPG at 10.8 SD).

In addition, there’s reason to believe that some of Lockett’s 2021 production was unsustainable. During the first half of the 2020 season, he was scoring touchdowns on 13% of his receptions. That’s incredible efficiency, ripe for regression. His second half rate of closer to 6% seems like it should have been predicable because it brought Lockett’s season-long TD efficiency down to around 10% of his receptions, which is much closer to his career average of 9.3%.

So, it’s Lockett’s massive early season production that seems unsustainable, rather than his second half being a mere artifact. It seems just as likely that what we were witnessing was regression to the Lockett’s mean on this offense in the second half, rather than breakout-style production in the first half of the 2020 season, that we can then project will be sustained into Lockett’s age-29 season.

But is Lockett’s volatility linked to the offensive system or is it something about the player himself?

This information is can be best visualized in a box and whisker plot, as pictured above. In a very basic sense, a box and whisker plot frames a set of data to demonstrate it's distribution or "range" which is the distance between the value of the minimum number in your data and the maximum number. That is represented by the two "whiskers" at on each box, which technically designate the top of the 1st & and 4th "quartiles" of the data. The wider the span of the two whiskers, the larger the range between minimum and maximum values. The box in the center represents the 2nd & 3rd quartiles, you can think of this like the 'meat' of the data. The line in the center of the box iis your median, and the X on the chart is the mean, or the average value of the set. Since this data is weekly fantasy finishes, the X is literally a visual representation of points-per-game. The height of the box indicates relative variability/volatility.

(For a refresher on how to interpret box whisker plots you may find this video helpful.)

You can see that the two halves of the season were not equivalent for each player. In Lockett’s first half to the season, shown in the first box (orange) in the chart above, you can clearly see the tremendous range of scores (his floor and ceiling) represented by the height of the box, as well as significant impact form outlier data signified by the height of the whiskers. Lockett’s second half, signified by the yellow box in the chart above, demonstrated a significant decrease in variability that accompanied his lower ceiling. You can see a similar trend in DK Metcalf’s two halves to the season in the two boxes to the right in the chart above. It’s important to note the higher floor on Metcalf’s production as compared to Lockett in the first half.

Thus, despite the impact of outlier data being at least comparable to that of Lockett’s first half (the long whiskers), the elevated floor indicates Metcalf was a far safer fantasy play during that period due to his higher potential floor. If you compare the two players' first half box/whisker plots (orange and light green ) you can see this visualized quite clearly. The bottom of DK's box (denoting that 75% of his finishes were greater than that value) has a higher value that that of Lockett's mean value over the same period. Their usage was far more equitable in the second half.

The question then becomes, is the degree of volatility in Lockett’s game significant as compared to other wide receivers with a similar acquisition cost? So, I whipped up a box and whisker plot for a handful of players around a similar ADP so we could investigate.

You can clearly see that Lockett’s end of season fantasy point distribution or “range” is far greater than most of the other players at that relative draft position. In fact, the only player who demonstrated a similar level of volatility in this study was teammate DK Metcalf. Perhaps there’s a correlation there.

Another notable feature of this comparison is the impact of outlier data points. The calculation of quartiles sometimes fails to encapsulate all the data points. In these instances the actual data point is represented outside the box as an "outlier." Lockett's week-7 drubbing of the Arizona secondary is the outlier of outliers. These values bastardize all points-per-game or end-of-season metrics, unless mentioned as a caveat. The benefit of this type of chart is that those numbers can be included alongside an intuitive comparison visual that gives you a fairly good idea of the variability in a set of data.

It should be noted that Lockett’s outlier is drawing up his upper whisker such that Metcalf’s ceiling likely remains higher due strictly to the difficulty (and therefore the relative unlikelihood) of Lockett replicating the extreme performance that outlier point represents. Additionally, nearly 75% of both Hopkins' and Metcalf’s finishes were of a greater magnitude than the bottom half of Locket’s finishes, a fact that cannot be understated. It's also quite notable that 50% of Hopkins’ finishes were of a greater magnitude than almost 75% of Lockett's finishes.

You can interpret this chart such that Hopkins had the highest ceiling/floor of all the players making him by far the most consistent, his median was in fact greater than three quarters of DJ Moore, Cooper Cupp, and Amari Cooper's weekly finishes.

Metcalf was an inconsistent scorer with boom potential. Cooper Kupp, Amari Cooper, and DJ Moore produced consistent quality fantasy finishes, but they have a tendency to disappear at times (sound familiar?). Of the group, Locket is the clear boom or bust candidate with a median finish that was well below the rest of the group.

This isn’t a necessarily a new development for Lockett either. As you can see from the box and whisker plot of Tyler Lockett fantasy production on a season-by-season basis, he has produced ample numbers of outlier games throughout his career…those outlier games have been embellishing his points per game numbers since 2016, for whatever it’s worth. You can also see that Lockett’s 2020 numbers don’t look all that dissimilar to the box and whisker plot from 2019, which also displayed a tremendous range, as well as prominent outliers.

Of course, the volatility that Lockett has demonstrated the past two seasons could also be a function of the entire team's on-field performance. As JJ Zachariason asserted, Wilson's poor performance surely contributed to his WR struggling...or was it the other way around? What about Seattle's putrid first-half defense? Didn't that improve in the latter half of 2020? Follow along while I investigate Seattle's A Tale of Two Halves.