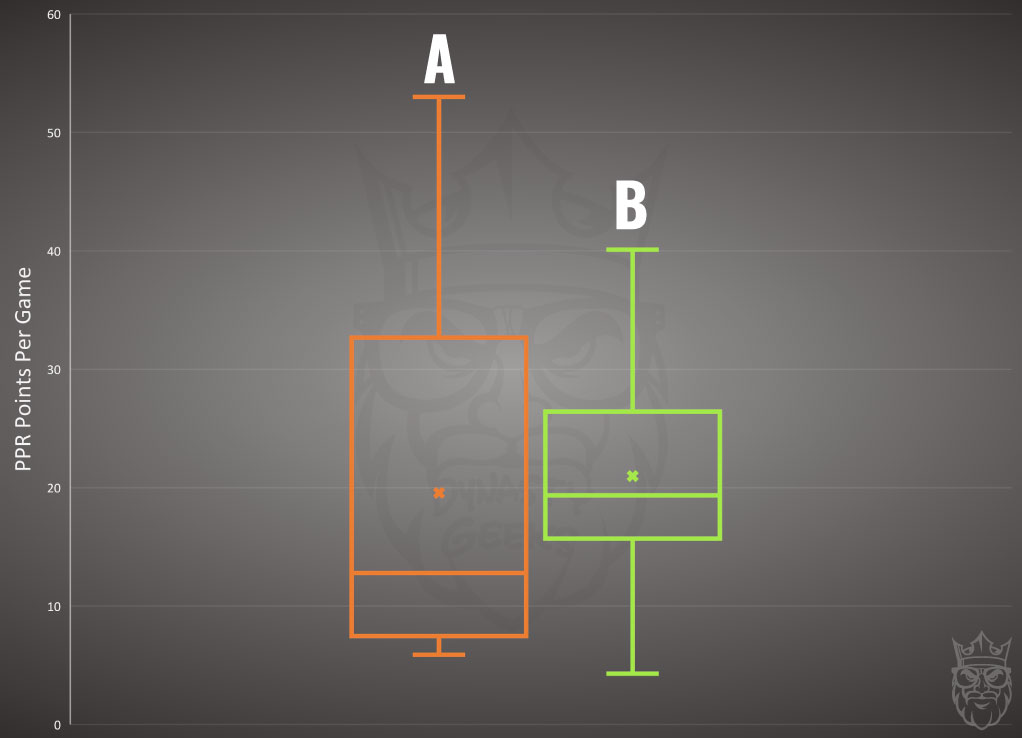 The Box & Whisker plot above shows an 8-game sample for two WRs. The height of their whiskers is determined by their potential range of outcome. Which player do you want?

Look, variance matters. I've heard numerous arguments, some by some analysis whose work I truly respect, that a player with a weekly fantasy point finish that varies greatly on a game-by-game basis is largely irrelevant. And sorry, not sorry, I still think that is flat out incorrect.

First, let's consider a little context. Some player's produce higher variance in their ppg finishes, that can absolutely be a function of their game and can remain a "sticky" stat year over year. The counter-argument to that observation is that drafting high-variance players doesn't necessarily lead to high variance output from your fantasy team. But this analysis is flawed as the model assumes player-agnostic drafting aside from the player(s) in question. When the truth of the matter is that if you fade the measure of variance with one-player you may or may not be demonstrating player agnosticism, i.e. drafting at a group-think level without filtering by context. But, if you fade variance as a general rule as seems to be the advice I'm hearing, you're more likely to pick up more players (on average) who demonstrate volatile point production, than if you were truly player-agnostic. That's not player agnosticism, that's a niche strategy of trying to exploit market over-corrections.

You don't believe me that the market corrects for variance? Consider the box/whisker plots for two receivers above. The Whiskers show the minimum and maximum scoring each player outputted, this is over an 8-game sample over the same date range. The boxes represent the range (from top to bottom) of the middle half of a player's week-to-week performances. Tall boxes represent volatile production, short boxes represent more stable production. Higher value finishes (i.e. more points) are displayed higher on the chart, and lower point finishes displayed lower. The X on the plot is that player's mean, or the points per game. The line in the middle of the box is the median of the finishes, and seperates the top half of finishes from the bottom half.

Both player A and player B scored a similar number of points, played the same number of games, and had similar point per game metrics (the X).

Absent names, which player do you want?

The player A in orange on the left, the one whose potential is sky-high? I mean, both have a similar floor right? Not really. If you  consider that the bottom of the "Box" in this chart represents the line that divides the top 75% of that player's finishes from the bottom 25%. You'll note that more than half of the finishes for player A were lesser than a full three quarters of player B's finishes, indicating that player A indeed has the lower floor.

The market also knows that high end is mainly just a couple huge games. Games that are rare and basically impossible to predict.

The market knows this at that is why DK Metcalf, player B, is going at the top of round 2 with a Sleeper single QB ppr redraft ADP of 15.9, whereas teammate Tyler Locket, Player A, whose main blemish is his volatility, is going 4 rounds later about 57.7 according to Sleeper's ADP database.

Thus if you're fading variance as a strong factor in roster management, you're more likely to end up with high variance players and thus have a roster that more and more exemplifies the traits of the majority of your players.

I'm not saying don't draft these players. I'm saying understand the risk of relying on them, especially in big matchups. Additionally, know that you should monitor and regulate your investment in the dynasty services of volatile players.

That's my 2 cents, and its worth every penny.